上一頁 探索更多 > The Great Classic: Romance of the Three Kingdoms 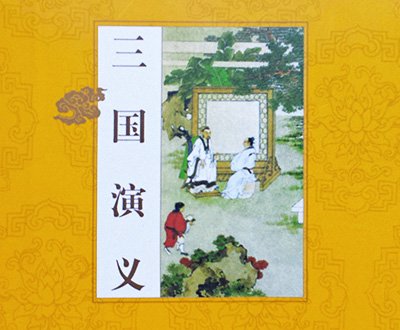 “The empire, long divided, must unite; long united, it must divide. Thus it has ever been.” - opening lines of Romance of the Three Kingdoms

It is early in the third century and the once-glorious Han Dynasty is in its twilight. Those who would cast themselves as China’s next rulers have brought the empire to the brink of war. Court eunuchs scheme, rulers fall, and great heroes are born in epic combat. The people of China, longing for peace, wonder what will become of their lives as war rages across the land. The dynasty seems to have lost its “Mandate of Heaven”—what now?

This is the backdrop for the literary classic Romance of the Three Kingdoms, one of the four great pillars of Chinese literature (Journey to the West, Outlaws of the Marsh, and Dream of the Red Chamber are the others). Its fourteenth century author, Luo Guanzhong, draws upon history and folklore to create a colorful tale that showcases the era’s political and social affairs.

Moreover, it is considered a guidebook to military strategy that has been likened to Sun Tzu’s The Art of War. Through its pages, readers meet dozens of iconic characters from history, and witness battles of every scale. Three Kingdoms is at the core of Chinese cultural identity and, especially, the concept of yi—the essential glue that binds a harmonious society.

Shen Yun’s 2015 dance Capturing Arrows With Boats of Straw, tells of one of the brilliant stratagems employed in this mega-historical saga.

As lords and generals gather to vie for supremacy, three great leaders soon emerge. Their names are Liu Bei, Cao Cao, and Sun Quan. These are men of formidable character, prowess, and guile, each keen to see his ambition fulfilled. They are each rulers of their own kingdoms—Shu, Wei, and Wu, respectively—and each aspire to unite the empire, bringing together “All Under Heaven,” as they call it.

With the help of the most brilliant minds and bravest hearts of the time, these three rise to power and engage in an epic contest for the future of China. 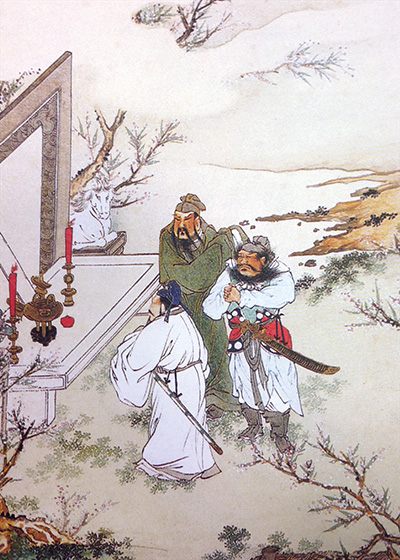 Warlord Liu Bei is the founder of Kingdom of Shu. His claim to the imperial throne is that he is a descendant of the Han’s rulers and can thus continue the heritage if not the dynasty.

Liu is portrayed as the most legitimate and deserving contender. He is high of mind and kind of heart, but lacks the resources and raw power of his rivals. But his lofty character acts like a magnet that attracts to his cause some of the novel’s most unforgettable heroes—mind-boggling strategists and nearly infallible warriors. Together, they successfully establish their own state.

The alliance of these heroes begins in one of Three Kingdoms’ best-known scenes: “Oath of the Peach Garden.” Liu Bei and the two warriors Zhang Fei and Guan Yu become sworn brothers:

“We don’t ask to be born on the same day,” they vow, “but we ask that it be on the same year, same month, and same day that we together die.”

The bond between the three establishes a strong theme that wends throughout the tale. Later, Liu Bei's influence increases rapidly after obtaining the help of Taoist sage and expert strategist Zhuge Liang. Some of Three Kingdoms’ most fantastic stories, like “Capturing Arrows With Boats of Straw,” owe to Zhuge’s exploits.

In Three Kingdoms, the ambitious general Cao Cao is Liu Bei’s and conniving rival. Here is an example of a dialogue between him and his loyal chef:

Cao Cao: I need to borrow something of yours. Loyal Chef: Sure, what is it? Cao Cao: Your head. Loyal Chef: What? Cao Cao: Don’t worry, I’ll make sure your family is taken care of.

Cao Cao (pronounced tsao tsao) has an enormous army and the loyalty of much of the realm. He is also an accomplished poet whose works go on to have a significant impact on the Chinese poetic style.

Meanwhile, the Sun clan controls most of southern China. At the age of 18, after his older brother is assassinated, the red-bearded Sun Quan steps into power. During the decisive "Battle of Red Cliffs," Sun Quan allies with Liu Bei to keep Cao Cao’s armies from advancing across the Yangtze River.

Their allegiance was short-lived, however, and the three kingdoms continued to maneuver and vie for the future of China, known as the Middle Kingdom. But in this riveting tale filled with both triumph and sacrifice, every episode comes back to the principle of yi.

The Meaning of Yi 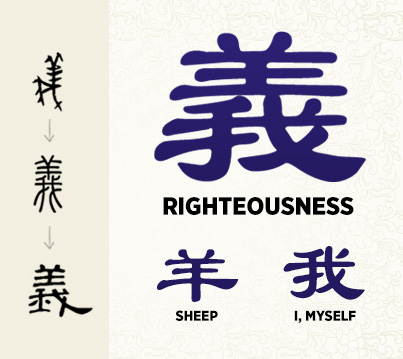 The Chinese character for Yi, 義, is composed of 羊 (sheep) on top and 我 (I, myself) on the bottom. In Chinese culture, sheep are symbols of prosperity because of their kind and obedient nature. The "I" character 我 originates from ancient oracle bone script where it represents a fighting tool complete with a sharp tooth. Together, the Yi character 義 literally signifies, “I am a sheep.” Symbolically, it suggests making sacrifices in the name of justice.

Yi explains the virtuous relationships between rulers and subjects, fathers and sons, husbands and wives, and among brothers and friends. In traditional Chinese society it was an accepted rule that no matter what happens, you must observe yi.

Perhaps the ultimate embodiment of yi can be seen in the character of General Guan Yu. Also known as Guan Gong, later generations erected temples in his memory and worshiped him as "the God of War." On one occasion, he agreed to duel with a fierce adversary. Poured a bowl of hot wine for good luck, Guan Yu refused to drink it, saying he would be back in just a moment. Minutes later, he returned with the adversary’s head before his wine had even chilled.

And yet, along with his flowing beard, it is his indomitable spirit of yi that makes him most memorable. Faced with likely defeat, the once unbeatable warrior uttered the immortal lines:

Should the city walls fall, it means death, that’s all. Jade can be shattered, but you cannot change its whiteness. Bamboo can be scorched, but its joint cannot be destroyed. The body might perish, but the name will live on for posterity.

In order to protect his lord Liu Bei’s family, Guan Yu once allowed himself to be captured by the merciless enemy, Cao Cao. Cao Cao, who had long admired Guan Yu’s abilities as a warrior, tried coaxing him to his side with gold, titles, and prized horses. A weaker man would have easily given in, but Guan Yu took the first chance to escape. He braved great danger and overcame injury to safely return his sworn brother’s family to him.

Still, he never forgot the generosity that, though an enemy, Cao Cao had shown him. Years later Cao Cao was defeated at the “Battle of Red Cliff” and was running for his life with what was left of his decimated army. Guan Yu was sent to finish him off and intercepted Cao Cao at a narrow mountain pass. Facing the mighty Guan Yu, the disheveled and exhausted Cao Cao did not stand a chance. Guan Yu let him go.

Guan Yu, who was torn, had chosen to face certain execution for disobeying orders rather than betray yi by killing his former benefactor. Of course, Guan Yu was not executed, because it turns out that the strategist Zhuge Liang had specifically sent him to kill Cao Cao precisely because he knew full well Guan Yu could not get himself to do it. The strategist did so because he knew that China still needed Cao Cao to maintain a balance of three equal kingdoms, but that is another story.

The much-maligned Cao Cao, on the other hand, is an example of a leader with a poor sense of yi. He is known for the quote, “I’d rather betray the world than let the world betray me.” His personal philosophy becomes apparent in one scene where a pursued Cao Cao takes refuge with his father’s sworn brother. While his friend is out on an errand, Cao Cao overhears servants sharpening knives and discussing a kill. Cao Cao’s paranoia is piqued and he murders the entire family. He then discovers they were only preparing to slaughter a pig for his grand welcome dinner. When his old friend, the lord of the house, returns Cao Cao realizes he will be held accountable. So he uses the who’s-that-behind-you trick and stabs his host.

The Tale Lives On

With protagonists shining with yi and antagonists sorely lacking yi, Three Kingdoms, like Guan Yu, leaves a most important lesson for posterity. Not only has it has had a profound impact on Chinese culture and society, the novel offers a glimpse into an ancient world of moral courage and righteousness, with the glue of yi that held it together.

Three Kingdoms author, Luo Guanzhong, believed that the fate of every nation is etched in the stars, and that humans are very limited in their ability to affect the grand flow of history. However, he also believed that if people are upright and virtuous, we are able to accomplish tremendous things, bringing glory to ourselves and our families, leaving a shining legacy that transcends the ages.

The Emperor Ascends: The Story of the Illustrious Kangxi 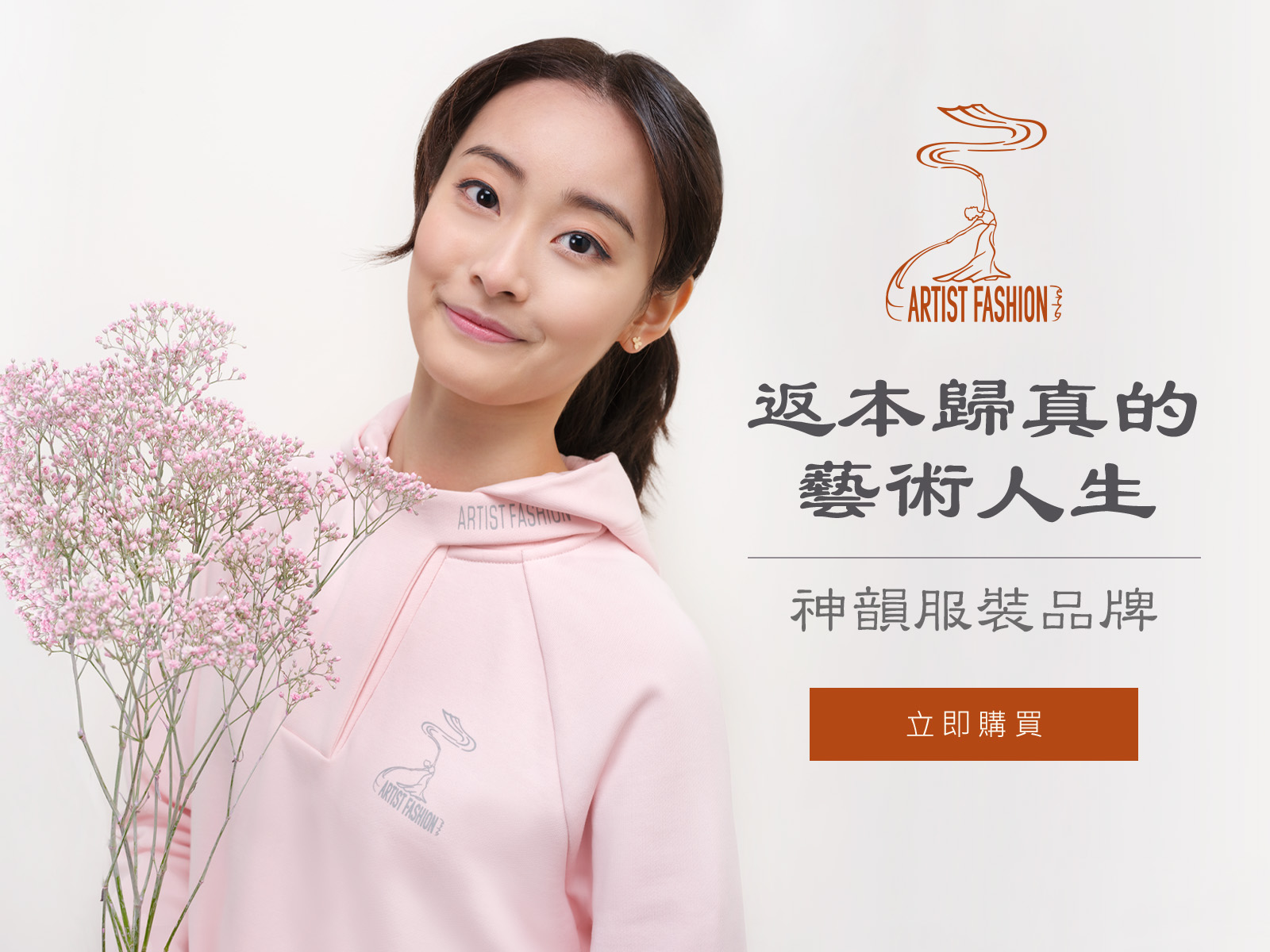