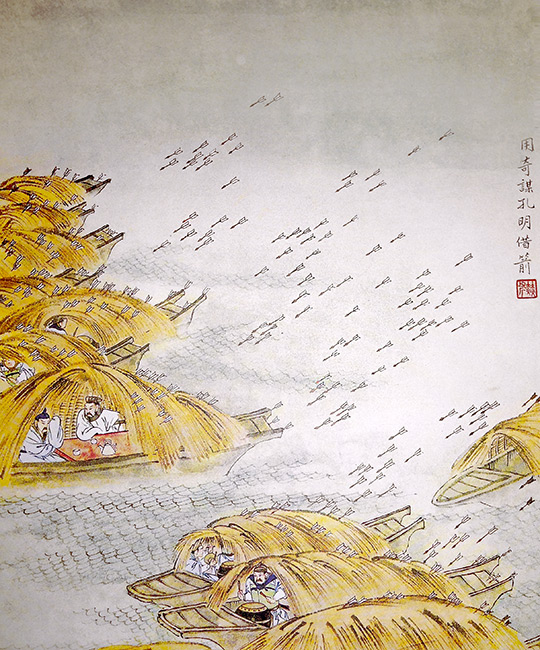 Do the best gifts come from friends or foes? When a master military strategist needs to produce 100,000 arrows in three days, he finds the most expedient solution—arrows delivered straight from the bows and quivers of an unlikely benefactor.

After the once-majestic Han Dynasty fell to subversion and usurpation in 220 C.E., China found itself in one of the most turbulent periods it had ever known. Once known as “the Middle Kingdom,” China was now divided into a trio of states in the north, southeast, and southwest. The internal warfare and struggle for power and survival that followed became known as the era of the Three Kingdoms.

Numerous accounts, both historical and fictional, have been written of these dramatic times. The most famous of these is Romance of the Three Kingdoms. Enshrined as one of the Four Great Classics of Chinese literature, the novel immortalized the period’s generals, statesmen, and warlords as a cast of intrepid heroes and treacherous villains.

This massive 14th century work, comparable in scale to Leo Tolstoy’s War and Peace, recounts many a colorful tale, vivified by semi-fictitious anecdotes and laced with the supernatural. Shen Yun’s 2015 classical Chinese dance “Capturing Arrows with Boats of Straw” depicts one of these stories.

At the story’s center is Chancellor Zhuge Liang of the southwestern state of Shu. He is recorded in history as the most eminent and brilliant military strategist of the time, yet the novel credits him with even greater fantastical feats. 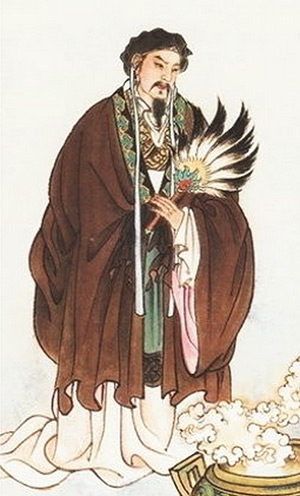 The year is 208 C.E., and the army of China’s northern Wei state is working its way south in hopes of forming an empire across the entire Middle Kingdom. The force, led by the ambitious Minister Cao Cao, is massive and is encouraged by victory after victory. When it reaches the banks of the Yangtze River, it makes camp and awaits the battle to come.

Across the river’s mighty waters lay the states of the Shu and Wu. Sensing the eminent threat from the north and knowing they are greatly outnumbered, the southwest Shu and southeast Wu leaders band together in a temporary coalition—a somewhat desperate attempt to counter the impending onslaught of the Wei forces.

Zhuge Liang is tasked with advising the generals of the Shu-Wu army and must contrive a way to withstand Cao Cao’s superior army from the north. The master tactician sets his mind to formulating a strategy—and the southlanders hope for a miracle.

The answer comes to Zhuge in an unexpected way. Although his Shu and the neighboring Wu are technically allies, the Wu generals don’t quite trust Zhuge, and are envious of his legendary abilities. Even in this moment when they should stand united, their jealousy leads them to devise a plan to get rid of him.

They inform him that they are planning an attack on the northern army and will need 100,000 arrows—a huge amount of ammunition. They tell him that the attack will commence in 10 days and, even though this is a seemingly impossible task, he will have to just find a way of getting them what they need, or else face execution. Zhuge, ever calmly fanning himself with his crane-feather fan, smilingly replies, “Just give me three days and no more.”

Zhuge spends the first two days preparing his secret operation. He gathers 20 swift boats and mans each with 30 soldiers. He then surrounds each group of soldiers with dummy soldiers stuffed with straw—in essence, an army of scarecrows.

On the third day, he takes his confidant General Lu Su (he wears a blue outfit in Shen Yun’s dance), and leads the boats across the wide waters of the Yangtze. Lu Su doesn’t really know what Zhuge has up his sleeve, and is more than a bit nervous as they near the enemy bank.

Heavy fog blankets the entire river as they row into enemy territory. Zhuge orders his men to shout and beat their thunderous battle drums. Frightened by the great ruckus and blinded by fog, the startled enemy fires endless volleys of arrows from the shore at the general direction of the noise.

Finally, loaded with 100,000 arrows and more for good measure, Zhuge directs the bristling ships to their home shore, where he is greeted by the confounded Wu generals.

“How did you concoct such a brilliant plan?” they asked with reluctant admiration.

“A good general must be well versed not only in battle strategy, but also in astronomy, geography, divination, and the principles of yin and yang,” Zhuge replied. “I foresaw the heavy fog three days in advance, and so formulated my plan.”

Face Off at Red Cliff

Thanks to Zhuge’s master plan, the Shu-Wu army was properly armed and ready to launch an attack. Zhuge didn’t have any qualms about fighting with borrowed arrows, because he had every intention of promptly returning them.

What followed became known as the Battle of Red Cliff, and those 100,000 arrows were key to what proved to be a pivotal victory for the forces of the south. They held off Cao Cao’s advance and turned back what little was left of his army.

The people living in the states of Wu and Shu remained secure. China’s divided powers entered a balanced stalemate and thus began the Three Kingdoms Period—an era that has enthralled historians and literati alike for nearly two thousand years.

Forced onto Mt. Liang, the Story of Lin Chong